Scheduling a time and place for the citizens academy is especially important. The sections below offer a sampling of variations in time, schedule, and location, which communities have used to plan successful programs.

Offering the program on a regular basis is crucial. Most programs are offered at least once and often twice per year—usually in the fall (September – November) or spring (February – April). Scheduling during these months usually avoids major conflict with holidays, inclement weather, and, importantly, a late spring budget process. Some smaller communities, such as Addison, TX (pop. 13,056) conduct programs every other year to ensure that a meaningful number of citizens participate.

In order to appeal to diverse populations, some communities have begun to offer their programs in multiple languages. The City of Oakland, CA, with large Asian- and Hispanic-American populations, offers concurrent programs in Cantonese and Spanish, for example.

Monday through Thursday nights are logical choices. The most popular nights are Tuesdays and Thursdays. Sessions are between two and three hours long, set somewhere between 5:30 and 9:00 pm. Saturday mornings are frequently designated for community or facility tours.

Some communities are creative with their schedules after considering feedback from citizens and past participants. Holly Springs, NC, runs its program every other Wednesday from 8:30am-1:30pm, April – June. Many local businesses will allow employees to attend during the day, so there is a good mix of participant ages. 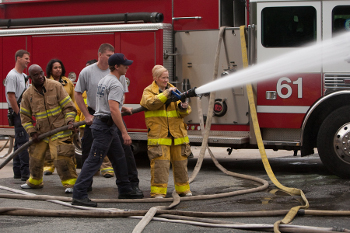 While some communities hold their sessions in city hall or the county board meeting room, many others have chosen to vary the session location regularly. For instance, sessions on public works are often hosted at the public works garage or operations center.

Whatever locations are chosen, most programs strive to ensure they are accessible. Finally, many communities use facilities unique to them, including community colleges, libraries, and recreation centers.