How Many in a Class?

Most programs prefer to cap enrollment around 20-25 participants. This preserves a smaller class size, permits more conversation during sessions, and allows for more intimate relationship building between citizens and staff. Some larger communities, including Buffalo, NY, Fresno, CA, and Mecklenburg County, NC, extend their target participation total to above 40 residents, but other large communities, including Durham, NC, and Clearwater, FL, still aim for about 20-30 people.

The number of applicants sometimes exceeds the target number of residents in a program. For the communities facing this dilemma, some use a waiting list while others simply inform those citizens not chosen to apply again for a future program.

Clearwater, FL, and Durham, NC, take alternates from their waiting lists if originally-selected participants drop out after one or two sessions.

While waiting lists might be used regardless of how participants are chosen, there are two primary ways by which cities and counties select applicants to their programs.

Volusia County, FL, for instance, uses this method but has bent it slightly. The interests of those applying are considered: the participants chosen under ‘first-come, first-served’ must meet with a county staff member before final acceptance to explain their interest in participating.

Other variations on selection processes include Moore County, NC, where new elected officials, appointed board members, and new residents are given first priority. Greenville, NC, reserves five spots for first priority for elected officials representing the city’s five council districts. The remaining spots are given to residents, with second priority given to those residing in the city’s extraterritorial jurisdiction (ETJ).

Moore County, NC, and Delray Beach, FL, also offer separate programs for high school-aged youth, who can obtain service hours for their participation. These communities also explicitly encourage county and city staff participation in the program, as does Kannapolis, NC, whose program for staff is held during lunch hours, separate of the sessions for city residents. 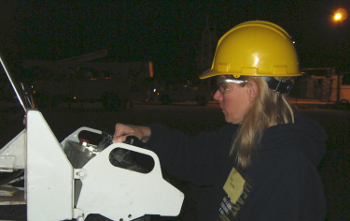 A participant from the Two Rivers, WI, Citizens Academylearns how to operate utility equipment

While most programs do not offer separate programs for youth, many set a minimum age to participate between 16 and 18 years old. Accordingly, most programs are geared to working adults and retirees. Nationwide, the average participant age hovers in the 50-70 range with some participants in their 20s and 30s.

Some programs report difficulty in recruiting middle-aged adults during the normal 6-9pm timeframe due to general family obligations.

Another frequently stipulated requirement is that applicants be residents of the community offering the program. In Durham, NC, for example, city staff verify that applicants’ property or vehicle taxes have been paid to the city or county before they are accepted.

In a few instances, applicants are screened with some kind of background check. This is much more common for citizens police academies, but done only in some circumstances for citizens academies. For a more extended discussion of this issue, see a blog post by Professor Rick Morse here.

Most cities and counties notify all applicants of their participation status through letter or e-mail. This has been reported an essential step, especially if a waiting list is used, for virtually all programs surveyed.

Wide variance exists in what information communities seek in their applications. Some are short and focus mainly on residency requirements (e.g. Durham, NC). Some require explanations of applicant interest for wanting to be involved in the community (e.g. Chula Vista, CA, and Greensboro, NC).

Please use the links below to access sample applications and letters from programs across North Carolina and the nation.