A citizens academy (also known as a city/county 101 program or neighborhood college) is, usually, a seven-to-eight week program where 20-25 residents are given the opportunity to meet with various local government staff and elected leaders and gain insight into local government services and operations.

There is variation from this typical model; each section within the Component Guide page profiles some differences.

Unlike citizen police and fire academies, the citizens academy looks comprehensively at the role and structure of local government in the community, which may include public safety.

Alumni often become informal ambassadors for the local government, share information with their neighborhoods, and often go on to serve on advisory boards. Some even run for elected office. 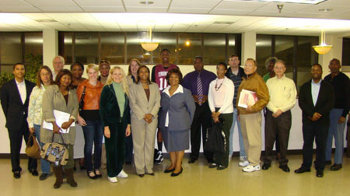 Reasons for creating and sustaining a citizens academy vary from community to community. However, three broad goals are present in most programs.

City of Fayetteville, NC: “The academy gives citizens a better understanding of what city departments do and how their functions affect quality of life issues.”

Town of Aberdeen, NC: “The program will help teach and cultivate new community leaders and help move those new leaders into important positions within the community.”

City of Lauderdale Lakes, FL: “Participants will [g]ain knowledge to become effective leaders and serve as role models in their neighborhoods.”

City of Winterville, NC: “Informed citizens will foster stronger working relationships between government and the community it serves.”