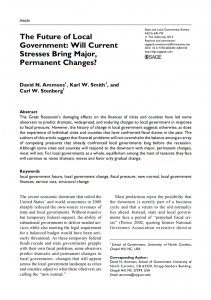 The Great Recession’s damaging effects on the finances of cities and counties have led some observers to predict dramatic, widespread, and enduring changes to local government in response to fiscal pressure. However, the history of change in local government suggests otherwise, as does the experience of individual cities and counties that have confronted fiscal duress in the past. The authors of this article suggest that financial problems will not overwhelm the balance among an array of competing pressures that already confronted local governments long before the recession. Although some cities and counties will respond to the downturn with major, permanent changes, most will not. For local governments as a whole, equilibrium among the host of tensions they face will continue to resist dramatic moves and favor only gradual change.